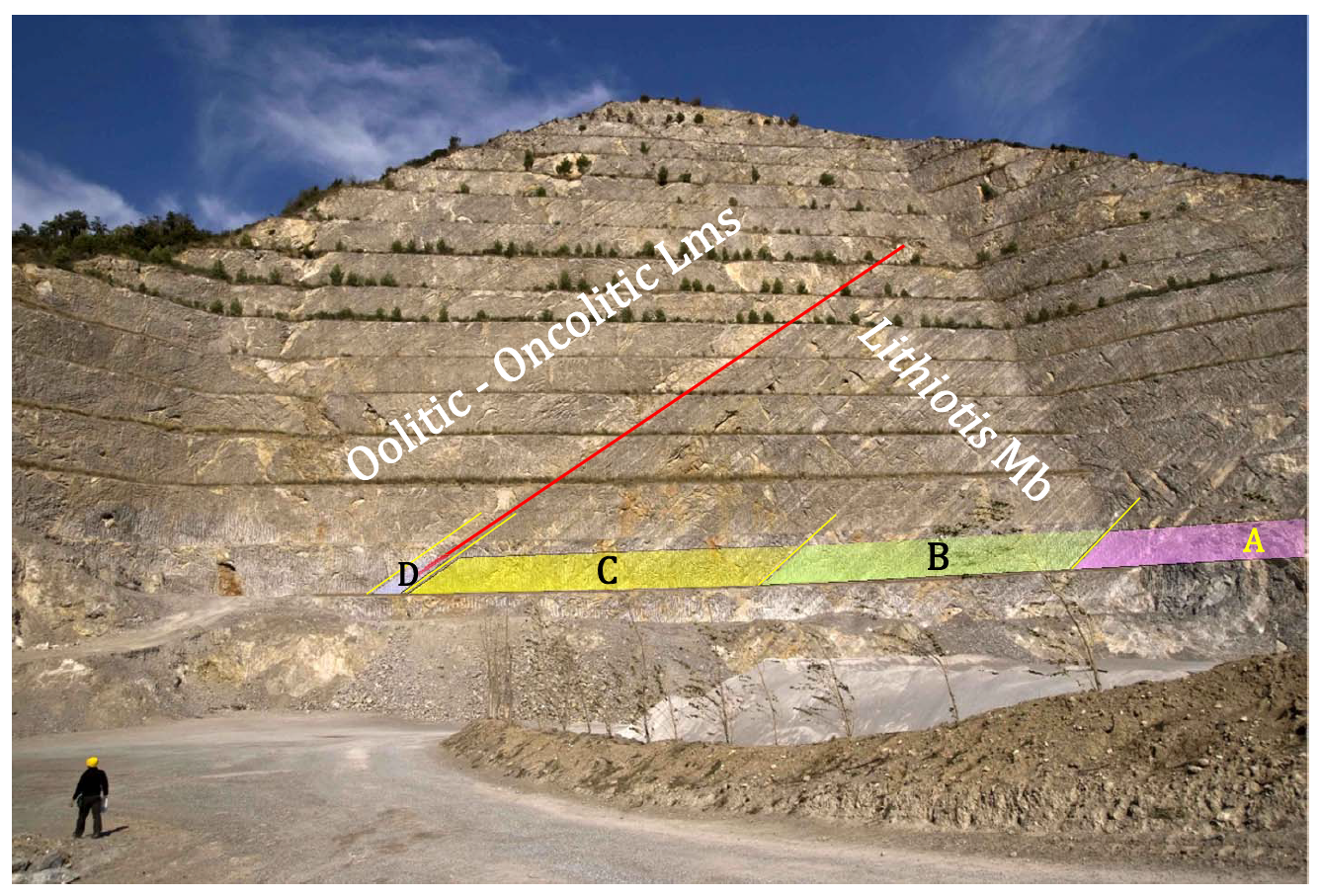 Lower Jurassic Tethyan and Panthalassan marine shallow-water successions are characterized by aberrant li-thiotid bivalves belonging to the Lithiotis Fauna. Their widespread occurrence, often in rock-forming abundance, represents a global biofacies, mostly restricted to the Pliensbachian–early Toarcian. Despite their wide occurrence and their prominent role as carbonate producers in shallow-water platforms, the biogeographic and stratigraphic distribution of this group of bivalves and their evolutionary history are obscure, mostly because they commonly have not been identified at the generic or specific level. In particular, their evolution and demise in relation to important global palaeoenvironmental perturbations, such as the Pliensbachian-Toarcian boundary event and the early Toarcian oceanic anoxic event are not yet known in detail.
In the Apennine Carbonate Platform of southern Italy, the Lithiotis Member, in the upper part of the Lower Jurassic Palaeodasycladus Limestones Formation, is characterized by the abundant occurrence of lithiotid bivalves. They disappear abruptly in the lowermost beds of the overlying Oolitic-oncolitic Limestones Formation, at the onset of the early Toarcian Oceanic Anoxic Event. More than 60 lithiotid bivalve concentrations occur in a nearly 120 m-thick succession spectacularly exposed on freshly cut walls in a quarry west of Mercato San Severino (Salerno). Field observations on the taxonomic composition and fabric of the shell beds (packing, maximum shell size, degree of shell articulation and fragmentation) allowed to distinguish four taphofacies (A–D). Taphofacies A records the appearance and spreading of the lithiotids, with accumulations characterized mainly by small-sized and loosely packed shells. Taphofacies B records the acme of lithiotid bivalves, with densely packed accumulations of large shells. These two taphofacies yield prevailing articulated individuals, commonly in life position. Taphofacies C records a decrease of the shell packing and frequency of articulated shells. However, it is not clear whether this represents the beginning of a prolonged crisis or just the local response to less favourable environmental conditions around a sequence boundary. Taphofacies D consists of three shell beds, one in the uppermost part of the Lithiotis Member and two within the lowermost part of the Oolitic-oncolitic Limestones Formation, in the stratigraphic interval characterized by the negative carbon isotope excursion of the early Toarcian OAE. The bivalve shells of these two beds consist exclusively of dis- articulated and fragmented shells, possibly reworked from underlying levels. The demise of the lithiotids carbonate factory in the Apennine Carbonate Platform and the extinction of the largest aberrant bivalves of the Lithiotis Fauna at the onset of the early Toarcian anoxic event were probably due to the physiological stress imposed by ocean acidification and increased nutrient input.
Key-words: Rock-forming bivalves, Carbonate platforms, T-OAE, Global warming, Ocean acidification