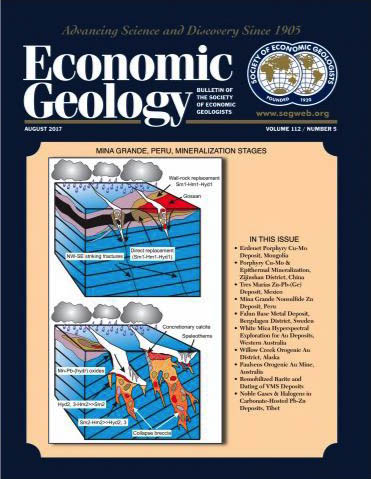 The Mina Grande zinc nonsulfide deposit (Amazonas region, Peru) consists of several accumulations in karst cavities of Zn oxide minerals, derived from weathering of a Mississippi Valley-type deposit hosted in Mesozoic carbonate rocks of the Condorsinga Formation (Pucará Group). The karst cavities hosting the nonsulfide ores were developed in the Miocene along northwest-southeast faults (avg 230° dip, 70° dip angle) associated with regional structures, and locally along stratification joints (avg 8° strike, 278° dip, and 26° dip angle). Thus far, the Mina Grande Zn accumulations have been partially mined in two pits (named “Fase A” and “Fase B”) and explored in a third area, named “Fase C.” In 2008, the resources were as follows: Fase A = 160,000 metric tons (t) @ 21.2% Zn, Fase B = 36,400 t @ 28.9% Zn, and Fase C = 116,700 t @ 22.5% Zn. The nonsulfide mineral assemblage, consisting mostly of hydrozincite, smithsonite, and hemimorphite, is associated with few remnants of the hypogene ore (pyrite and sphalerite). Mineralogical and petrographic studies revealed several texturally distinct smithsonite and hydrozincite generations, which are characterized by extremely negative δ13C compositions, pointing to the prevailing contribution of an isotopically light carbon component from the oxidation of organic matter-derived carbon, and different δ18O isotope compositions: 26.9 to 27.2 and 26.0 to 26.3‰ δ18O VSMOW for smithsonite, and averages 24.6 and 23.7‰ δ18O VSMOW for hydrozincite. These distinct δ18O compositions indicate that smithsonite and hydrozincite precipitated at least after two depositional stages. These stages were probably related to several periods of uplift that occurred in the Bongará district since at least ~10 Ma, when the transition from the Pebas to Acre systems affected the Amazonas foreland basin in the Miocene. The karst activity, to which the supergene mineralization is related, was restricted to the late Miocene and early Pliocene periods. Climatic conditions reconstructed from the ecosystems persisting in the region from Late Tertiary to Recent time suggest that the Mina Grande supergene mineralization was associated with several weathering episodes that occurred under a climate resembling the present-day climatic conditions.