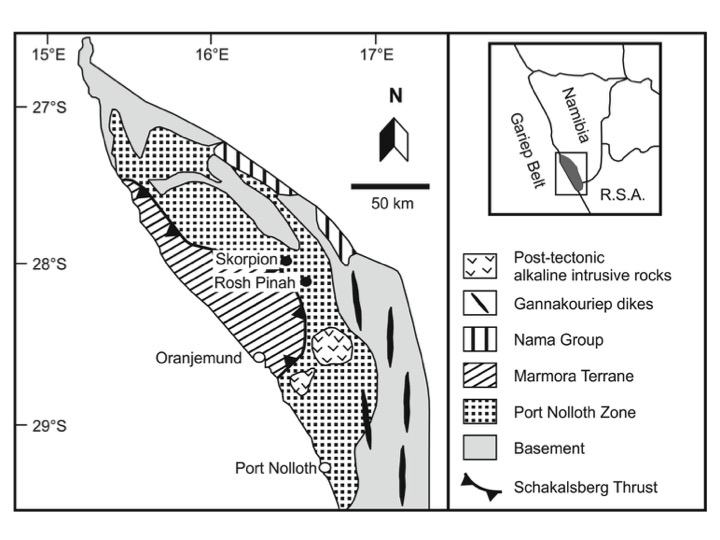 Skorpion and Rosh Pinah Zn-(Pb) deposits are hosted in Neoproterozoic rocks that are part of a volcano-sedimentary sequence within the Gariep Belt of southwest Namibia. Skorpion is the largest Zn-nonsulphide mineralization ever discovered. It formed from weathering and oxidation of a volcanic-hosted massive sulphide (VMS) protore and mostly consists of Zn-oxidized minerals. Rosh Pinah is a hybrid Zn massive sulphide deposit, with some VMS and Broken Hill-type characteristics and partly weathered in the uppermost part of the massive sulphide lens. We compared the deep oxidation process that occurred at Skorpion with the limited weathering of the Rosh Pinah deposit by studying the carbon and oxygen isotope ratios of supergene carbonates minerals. Twenty three smithsonite samples from the Skorpion deposit and 6 gossanous samples (containing both host dolomite and smithsonite) from the uppermost levels of the Rosh Pinah mine have been analysed.
The Skorpion smithsonites form botryoidal crusts overgrown by euhedral calcite crystals. At Rosh Pinah all sampled smithsonites occur in veins within the dolostone host rock. Skorpion smithsonite is characterized by d13C values strongly variable between 9.1‰ and 0.1‰ VPDB and by a small range in d18O from 28.0 to 29.9‰ VSMOW. Calcite shows a minor variation in d13C with values being generally positive (0-1.6‰ VPDB) and d18O values slightly lower than those of smithsonite (25.4-27.1‰ VSMOW). The analyses of the Rosh Pinah samples show that the host dolomite is characterized by d18O values ranging from 18.7 to 22.0‰ VSMOWand by negative d13C values (5.9 to 2.7‰VPDB). The carbon isotope ratios of smithsonite, as in Skorpion, are negative (2.8 to 1.9‰ VPDB) and partly overlapping with those of the host dolomites. The d18O values (26.7-29.0‰ VSMOW) are on average comparable with the values measured at Skorpion. The similar negative d13C values of smithsonite and dolomite at Rosh Pinah point to the involvement of both re-oxidized organic carbon and host dolomite inorganic carbon during smithsonite formation, whereas at Skorpion a larger contribution of isotopically light organic carbon is considered more probable. The comparable d18O compositions of smithsonite from the two deposits imply similar ore-forming fluids and/or similar temperatures conditions during formation. In agreement with former studies, we suggest that Skorpion smithsonite precipitated at an average temperature near 17°C from fluids depleted in 13C due to a high contribution of soil organic carbon, either during the first (Late Cretaceous-Paleocene) or the last humid climatic stage (early-middle Miocene). Even if the similarity between the d18O composition of Rosh Pinah and Skorpion smithsonites points to similar oreforming fluids and/or similar conditions during formation, the relatively high d13C values of the Rosh Pinah smithsonites suggest a minor influence of isotopically light organic carbon and the absence of soils over this deposit. Combining these data with the limited thickness of the supergene zone over the latter orebody, it is likely that the Rosh Pinah smithsonites, together with the gossan in which they occur, formed at the end of the early-middle Miocene semi-humid period. The d18O and d13C compositions of Skorpion calcite indicate that the precipitating supergene fluids remained roughly unchanged, but that the bicarbonate from the host rock became prevailing. This suggests  that calcite formation occurred at the beginning of the last late Miocene-Pliocene semi-arid period, when the host marbles were uplifted and karstified, thus promoting a higher bicarbonate contribution from   dissolving host rock.