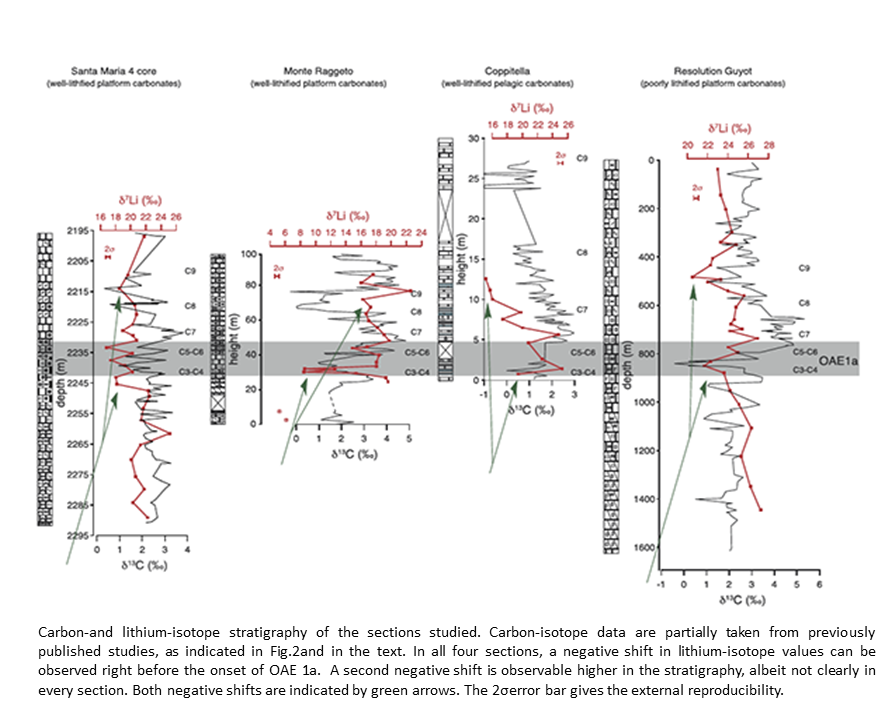 An abrupt rise in temperature, forced by a massive input of CO2 into the atmosphere, is commonly invoked as the main trigger for Oceanic Anoxic Events (OAEs). Global warming initiated a cascade of palaeoenvironmental perturbations starting with increased continental weathering and an accelerated hydrological cycle that delivered higher loads of nutrients to coastal areas, stimulating biological productivity. The end-result was widespread anoxia and deposition of black shales: the hallmarks of OAEs. In order to assess the role of weathering as both an OAE initiator and terminator (via CO2 sequestration) during the Early Aptian OAE 1a (Selli Event, ∼120 Ma) the isotopic ratio of lithium isotopes was analysed in three sections of shallow-marine carbonates from the Pacific and Tethyan realms and one basinal pelagic section from the Tethyan domain. Because the isotopic composition of lithium in seawater is largely controlled by continental silicate weathering and high- and low-temperature alteration of basaltic material, a shift to lighter δ7Li values is expected to characterize OAEs. The studied sections illustrate this phenomenon: δ7Li values decrease to a minimum coincident with the negative carbon-isotope excursion that effectively records the onset of OAE 1a. A second negative δ7Li excursion occurs coeval with the minimum in strontium isotopes after the event. The striking similarity to the strontium-isotope record argues for a common driver. The formation and destruction (weathering) of an oceanic LIP could account for the parallel trend in both isotope systems. The double-spike in lithium isotopes is probably related to a change in weathering congruencies. Such a chemostratigraphy is consistent with the hypothesis that an increase in silicate weathering, in conjunction with organic-carbon burial, led to drawdown of atmospheric CO2 during the early Aptian OAE 1a.
Key-words: OAE 1a,  Selli event,  Li isotopes, silicate weathering