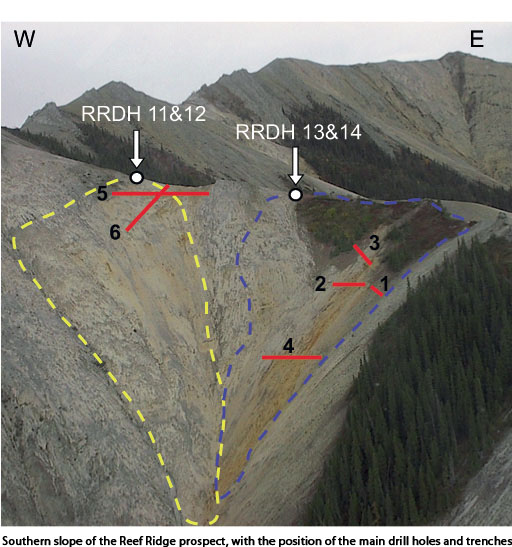 The Reef Ridge deposit is a typical supergene "nonsulfide" zinc mineralization, located in the Yukon-Koyukuk region of west-central Alaska (USA). It is hosted in sedimentary rocks of the Farewell terrane, a continental fragment sandwiched between the Siberian and Laurentian cratons during the early Paleozoic. The mineralization occurs in Lower-Middle Devonian shallow-water dolomite of a Paleozoic carbonate platform succession belonging to the Nixon Fork tectonic unit. The mineralization consists of oxidized minerals associated with minor remaining sulfides (pyrite/marcasite and sphalerite). In the oxidation zone, smithsonite is the predominant mineral, mixed with Fe-(hydr)oxides (goethite and hematite).

A complete petrographic and mineralogical study was performed. Samples were analyzed by X-ray diffraction, inductively coupled plasma-mass spectrometry and emission spectrometry, energy dispersive scanning electron microscopy, and QEMSCAN® (quantitative evaluation of minerals by scanning electron microscopy). The most abundant mineral in the nonsulfide ore is smithsonite. Similar to other nonsulfide Zn deposits worldwide, the first generation of smithsonite has replaced both primary sphalerite and the host carbonates. A second smithsonite generation precipitated as cement in vugs, cavities, and fractures. Minor zinc amounts also occur in the Fe-(hydr)oxides, and zinc traces have been identified in clay minerals.
The carbon and oxygen isotope values of smithsonite at Reef Ridge vary from -0.7 to 2.1” relative to Vienna Peedee belemnite (VPDB) and 19.1” to 21.9” relative to Vienna standard mean ocean water (VSMOW). The 13C values are similar to those of the host rock, suggesting that the predominant carbon source for smithsonite was the host carbonates, with only a limited contribution from organic carbon. The oxygen isotope ratios of Reef Ridge smithsonite are more depleted in 18O compared to supergene nonsulfides from other parts of the world formed under warm-humid, temperate, or semiarid climates. The oxygen isotope fractionation between water and smithsonite, which relates the 18O value of the mineralizing solution, the formation temperature of smithsonite, and its 18O composition, indicates that the 18O composition of Reef Ridge smithsonite is related to very low formation temperatures (about 10 °C), and strong depletion in 18O of the precipitating waters.
The 18O smithsonite composition, the strong 18O depletion, and the relationship of the formation of the Reef Ridge nonsulfide deposit with the development of the Sleetmute upland surface (which started in the Late Tertiary and continues to the Present) indicate that the formation of the Reef Ridge nonsulfide deposit is probably related to cold/humid weathering episodes during a period comprised between Late Tertiary and Holocene.