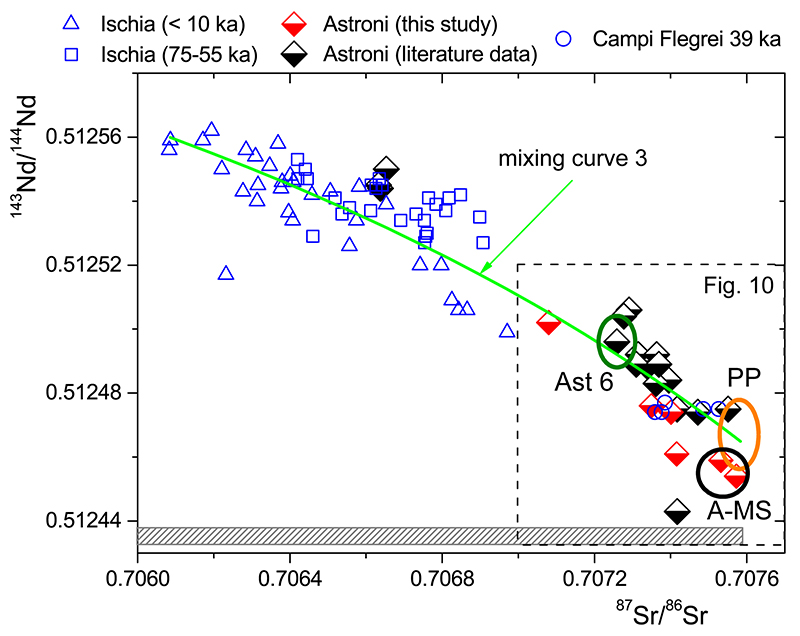 Sr-isotopic microanalysis has been performed on selected minerals from the Campi Flegrei caldera, together with Sr and Nd isotopic ratios determinations on bulk mineral and glass fractions. The aim was a better characterization of the chemically homogeneous, but isotopically distinct magmatic components which fed volcanic eruptions of the caldera over the past 5 ka, in order to enhance our knowledge about one of the most dangerous volcanoes on Earth.
Information on the involved magmatic endmembers, unobtainable by analyzing the isotopic composition of whole rock samples and bulk mineral fractions, has been acquired through high precision determination of 87Sr/86Sr on single crystals and microdrilled mineral powders. We focused our investigations on the products emplaced during the Astroni 6 eruption (4.23 cal ka BP), assumed representative of the expected event in case of renewed volcanic activity in the Campi Flegrei caldera. Data on single crystals and microdrilled mineral powders have been compared with Sr and Nd isotopic compositions of bulk mineral fractions from products emplaced during the whole Astroni activity, which included seven distinct eruptions. The 87Sr/86Sr ratios of single crystals and microdrilled mineral powders are in the 0.7060 to 0.7076 range, much wider than that of bulk mineral fractions, which range from 0.7066 to 0.7076. Moreover, the Sr isotopic ratios are inversely correlated to 143Nd/144Nd. The new data allow us to better define the magmatic endmembers involved in mingling/mixing processes that occurred prior to/during the Astroni activity. One magmatic endmember, characterized by average 87Sr/86Sr ratio of ~0.70750, was quite common in the past 15 ka activity of the Campi Flegrei caldera; the other, as evidenced by the isotopic composition of single feldspar and clinopyroxene crystals, is less enriched in radiogenic Sr (87Sr/86Sr ~0.70724). The latter is interpret to represent a new magmatic component that entered the Campi Flegrei caldera feeding system in the past 5 ka, the previously recognized Astroni 6 component. However, diopside crystals in Astroni 6 are characterized by even lower 87Sr/86Sr, in the range 0.7060-0.7068, and by the highest 143Nd/144Nd ratios measured in the products of Astroni activity. These diopsides may represent another common magmatic component, as they have been found in most of the Phlegrean Volcanic District products emplaced over the past 75 ka. These diopsides, crystallized in a mantle-derived mafic magma, were entrapped by the Astroni 6 magma during ascent, before it mingled/mixed with the more differentiated and enriched in radiogenic Sr resident magma, thus attaining an intermediate Sr-Nd isotopic fingerprint.
These results have an important outcome on the understanding of the volcano behavior, as renewed activity can be triggered by the arrival of fresh magma in the feeding system that would mingle/mix with the resident magma. Such an event may be able to start an unrest phase at the volcano that could last for years or decades, perhaps culminating in a new eruption.
Key-words: Magma mixing, Microdrilling, Sr-isotopic microanalysis, Astroni eruptions, Campi Flegrei caldera