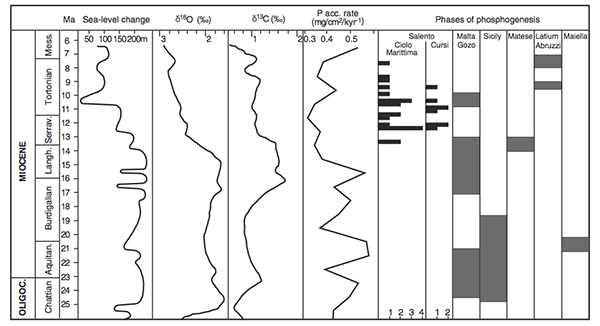 The upper Middle to lower Upper Miocene (Serravallian to Tortonian) sedimentary succession in Salento (southern Italy) includes glauconite- and phosphate-rich deposits, which are associated with pelagic micrite. In Baia del Ciolo and Marittima (southern Salento), the succession is composed of shallow-water platform car- bonates of Late Oligocene age (Chattian; Porto Badisco Formation), which are overlain by a 20- to 30-cm-thick level of glauconite-rich micrite with abundant reworked particles and fossils of the underlying Porto Badisco For- mation. This interval is in turn covered by an up to 15 cm thick phosphatic crust (“Livello ad Aturia”), which itself is overlain either by a hemipelagic chalk-like carbonate of Middle to Late Miocene age (“Pietra Leccese”; Marittima) or directly by a micrite of Late Miocene age (Messinian; Novaglie Formation; Baia del Ciolo), which shallows upwards into a shallow-water platform carbonate. A large hiatus is present in this succession, which likely includes the Lower and lower Middle Miocene. In the region of Lecce, two discrete levels enriched in glauconite and phosphate—each associated with a major discontinuity—occur within the Pietra Leccese. The strontium-isotope ages derived on phosphate nodules and phosphatized and non-phosphatized fossils and cal- careous nannofossil ages indicate a time interval of phosphogenesis between 13.5 and 7.5 Ma, with two clusters at 12 and 10.5 Ma. The glauconite and phosphate-rich sediments resulted from a current-dominated regime, which was characterized by low overall sedimentation rates, erosion and sediment reworking, and authigenesis. This regime was likely related to a generally westward-directed bottom current, which was forced to upwell once it arrived at the western border of the eastern Mediterranean basin. The timing of the principal phosphogenic phases can only partly be correlated to those of other occurrences in this part of the Mediterranean (Malta, Gozo, southern Sicily, Matese, Latium-Abruzzi platform). The partial diachrony in phosphogenesis may express the effect of lateral switching in and/or focusing of upwelling zones.
Key-words: Miocene, Salento, Italy, Phosphogenesis, Paleoceanography