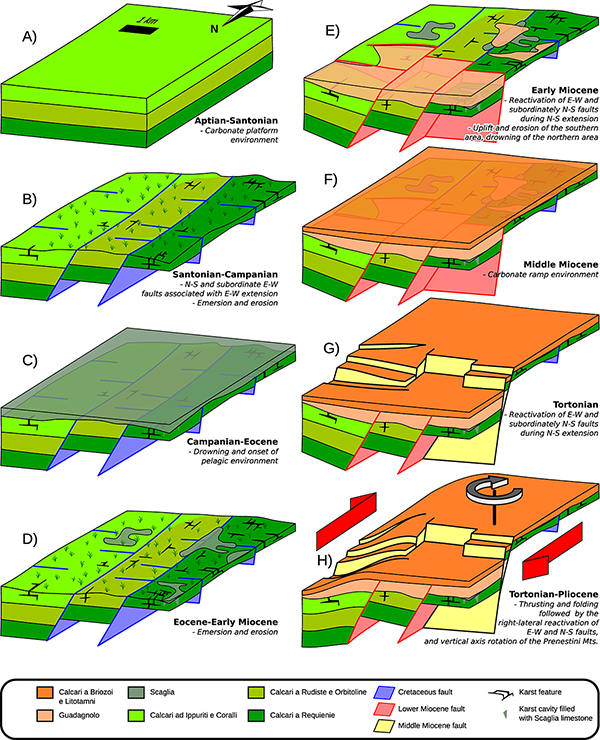 This study reports on the Rocca di Cave extensional fault system, which is located in the Prenestini Mountains (Central Italy) of the Apennines fold-and-thrust belt and presently represents the oldest exposure of early orogenic foreland fault system of the Apennines. This fault system was oriented perpendicular to the strike of the foredeep-peripheral bulge system, indicating that the onset of convergence was marked by a foredeep-parallel extension, instead of the commonly observed foredeep-perpendicular stretching associated with lithosphere flexuring. The studied fault system is formed by a 10 km long and 2 km wide E-W elongated area that includes two mutually orthogonal sets of faults oriented about E-W and N-S, respectively. E-W and, mainly, N-S striking faults developed during a preorogenic (Santonian to Campanian in age) E-W oriented extension kinematics, which caused first uplift and erosion and then drowning of the Cretaceous carbonate platform and the onset of a pelagic environment. Both fault sets were later reactivated in the early Miocene, when the area was forming part of the foreland region ahead of the eastward migrating Apennines fold-and-thrust belt and was undergoing local N-S oriented, i.e., foredeep-parallel, stretching. This extensional stage implied the sedimentation of hundreds of meters of synkinematic strata in the northern block of the Rocca di Cave Fault System, coevally with episodes of subaerial erosion in areas of the southern block. Further extensional and right-lateral reactivation of inherited faults occurred in the late Miocene, during the progressive incorporation of the area into the Apennines belt.
Key-words: Apennines, inheritances, faults