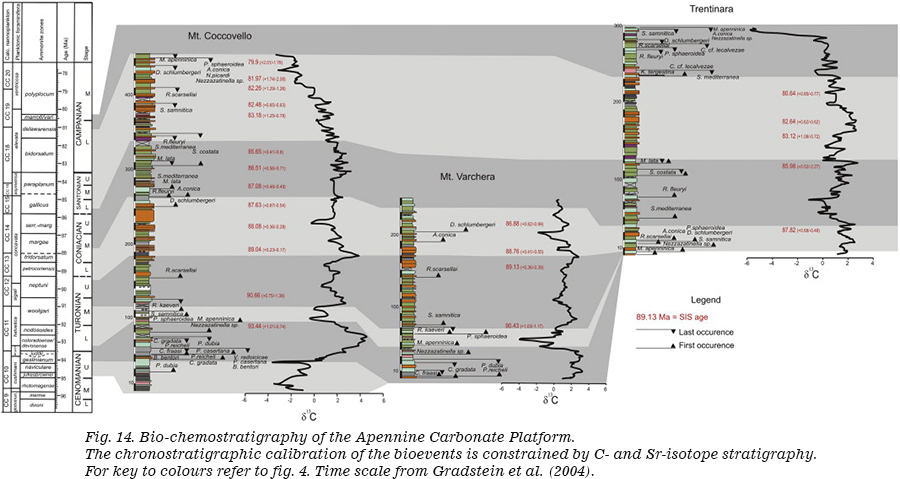 Shallow-water carbonates are invaluable archives of past global change. They hold the record of how neritic biologic communities reacted to palaeoenvironmental changes. However, attempts to decipher these geological archives are often severely hampered by the low stratigraphic resolution attained by biostratigraphy. This is particularly the case for the Upper Cretaceous carbonate platforms of the central Tethyan realm: their biostratigraphy suffers from very low resolution and poor correlation with the standard biochronologic scales based on ammonites, planktic foraminifers and calcareous nannoplankton.

In this paper we show how this problem can be tackled by integrating biostratigraphy with isotope stratigraphy. We present a detailed record of the benthic foraminiferal biostratigraphy and carbon and strontium isotope stratigraphy of three upper Cenomanian-middle Campanian sections belonging to the Apennine Carbonate Platform of southern Italy. For the upper Cenomanian-Turonian interval, the carbon isotope curves of the studied sections are easily correlated to the reference curve of the English Chalk. The correlation is facilitated by the matching of the prominent positive excursion corresponding to the Oceanic Anoxic Event 2. For the Coniacian-middle Campanian interval, the correlation is mainly based on strontium isotope stratigraphy. We use the 87Sr/86Sr ratios of the low-Mg calcite of well preserved rudist shells to obtain accurate chronostratigraphic ages for many levels of the three studied sections. The ages obtained by Sr isotope stratigraphy are then used to better constrain the matching of the carbon isotope curves.