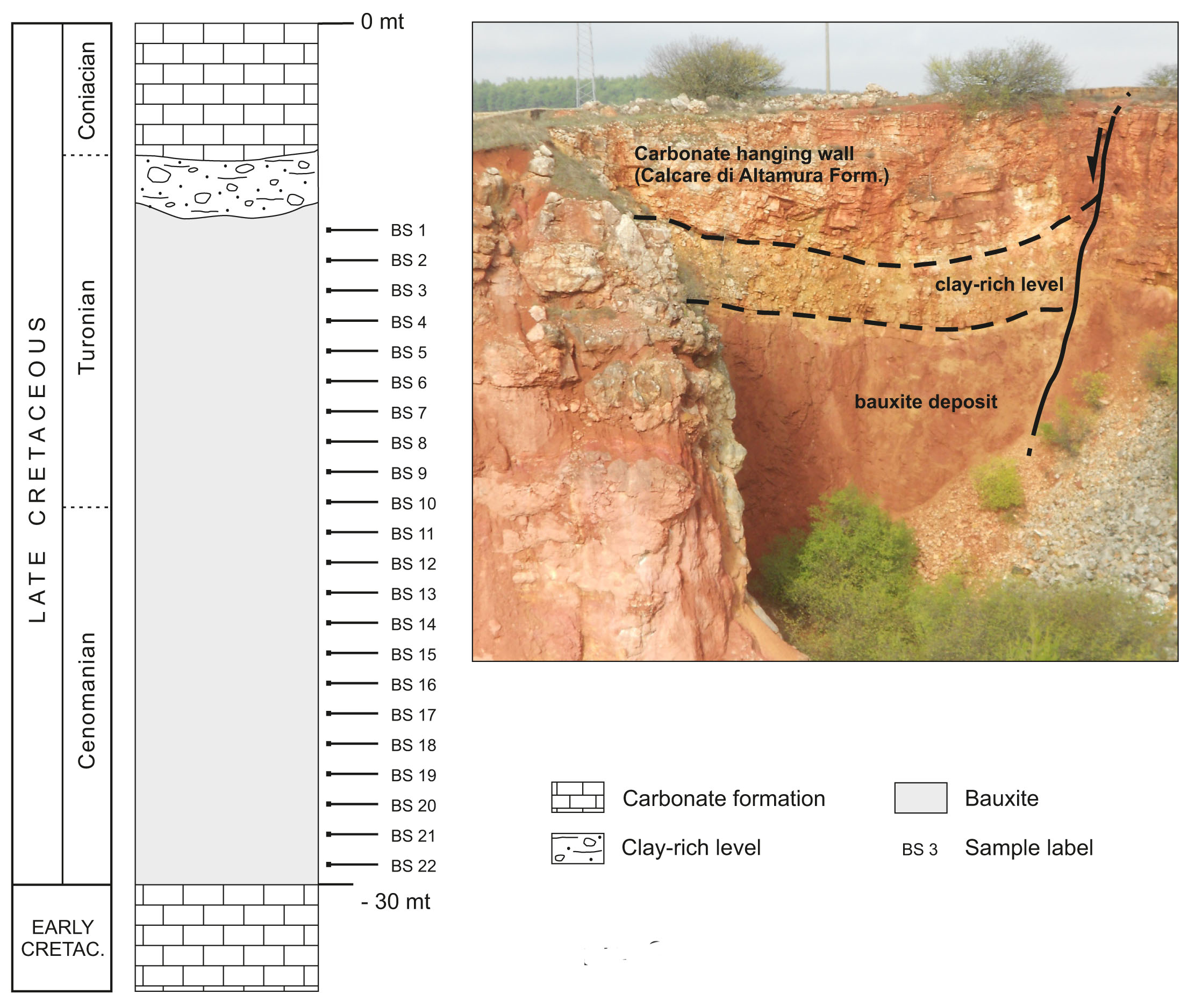 This study focuses on a late Cretaceous karst bauxite deposit in the Murge area of the Apulia district, southern Italy. The first analysis of the vertical distributions of a wide range of elements (including REEs and selected trace elements) throughout the deposit was shown in order to identify the processes determining element fractionation during the evolution of the bauxite.  The studied karst bauxite deposit exhibits an ooidal texture, is mineralogically homogeneous, and contains higher abundances of boehmite than of hematite, kaolinite, and anatase. The major element composition of the bauxite is dominated by elevated concentrations of SiO2, TiO2, Al2O3, and Fe2O3, and analyses of element mobility within the bauxite indicate that all elements except for Nb and Ni, and to a lesser extent Cr, are depleted relative to the immobile element Ti. R-mode factor analysis revealed a number of key findings: (i) some low-solubility elements (e.g., Zr, Th, Ti, V, Ga) were concentrated in detrital zircon and monazite (Zr, Th), in anatase (Ti, V), and possibly in boehmite and hematite (Ga) during the later stages of bauxitisation; (ii) Fe and Cr were concentrated during wet conditions, whereas Al and Co accumulated during dry conditions; (iii) distributions of the light REEs (LREEs) and the heavy REEs (HREEs) are controlled by the same processes, suggesting that little LREE/HREE fractionation occurred during bauxite formation; and (iv) the behaviour of cerium is different from that of the other REEs, and highly variable cerium anomalies are observed across the deposit, with three characteristic Ce/Ce* maxima with values of > 2. Parisite was the only authigenic cerium mineral detected during this study. Thus, we propose a three-step model to explain the distribution of Ce: cerianite is dissolved by cerium reduction, is transported by downward-moving meteoric water (per descensum), and finally parisite is precipitated. This cycle was repeated several times in the Apulian karst bauxite in response to Eh decreases under alkaline conditions, promoted by fluctuations in the groundwater level. Finally, we used the value of the Eu anomaly to discuss the parental affinity or protolith of the bauxite. The value of the Eu anomaly (min. Eu/Eu* = 0.76, max. Eu/Eu* = 0.89) indicates that the bauxite was not derived from carbonates, but rather, that the majority of the bauxite was influenced by intermediate to mafic magmatic sources. Eu/Eu* vs Sm/Nd diagram suggests that the parental material for the bauxite was derived from a combination of a distant magmatic source and clastic material derived from a continental margin (northern Africa) to the south.