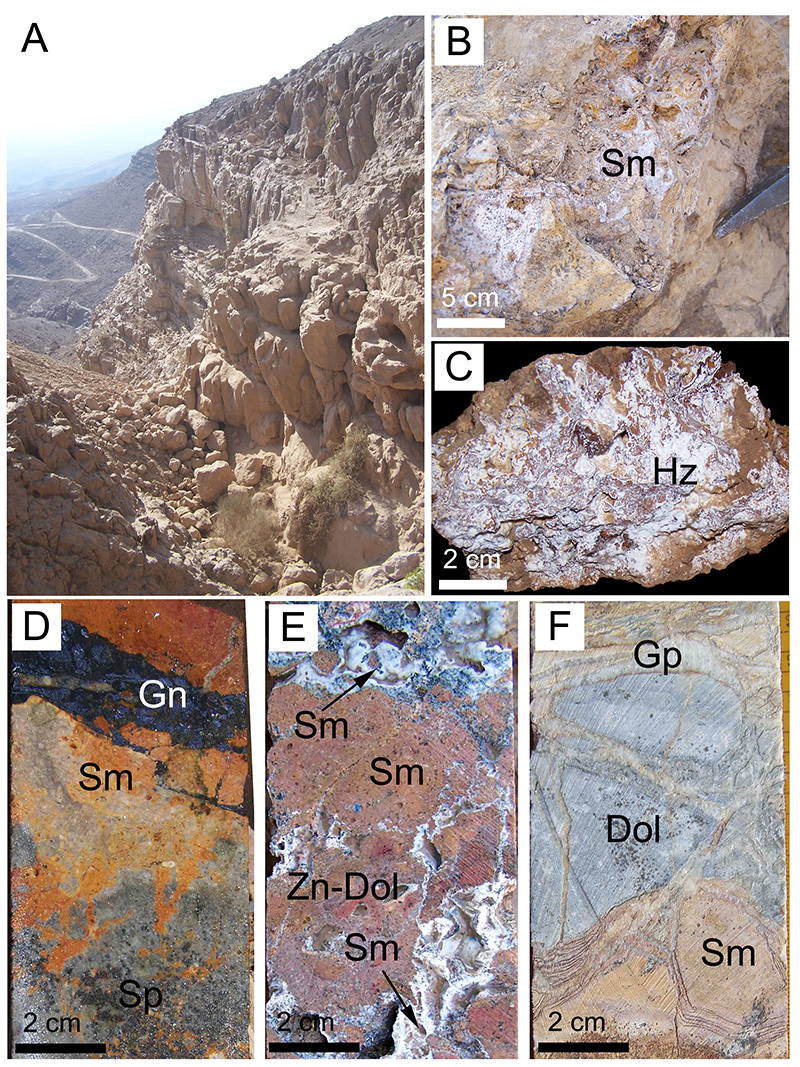 Abstract
The Jabali Zn-Pb-Ag deposit is located about 110 km east of Sana'a, the capital of Yemen, along the western border of the Marib-Al-Jawf/Sab'atayn basin. The economic mineralization at Jabali is a nonsulfide deposit, consisting of 8.7 million tons at an average grade of 9.2% zinc, derived from the oxidation of primary sulfides. The rock hosting both primary and secondary ores is a strongly dolomitized carbonate platform limestone of the Jurassic Shuqra Formation (Amran Group). The primary sulfides consist of sphalerite, galena and pyrite/marcasite. Smithsonite is the most abundant economic mineral in the secondary deposit, and is associated with minor hydrozincite, hemimorphite, acanthite and greenockite. Smithsonite occurs as two main generations: smithsonite 1, which replaces both host dolomite and sphalerite, and smithsonite 2, occurring as concretions and vein fillings in the host rock. At the boundary between smithsonite 1 and host dolomite, the latter is widely replaced by broad, irregular bands of Zn-bearing dolomite, where Zn has substituted for Mg. The secondary mineralization evolved through different stages: 1) alteration of original sulfides (sphalerite, pyrite and galena), and release of metals in acid solutions; 2) alteration of dolomite host rock and formation of Zn-bearing dolomite; 3) partial dissolution of dolomite by metal-carrying acid fluids and replacement of dolomite and Zn-bearing dolomite by a first smithsonite phase (smithsonite 1). To this stage also belong the direct replacement of sphalerite and galena by secondary minerals (smithsonite and cerussite); 4) precipitation of a later smithsonite phase (smithsonite 2) in veins and cavities, together with Ag- and Cd-sulfides.
The δ18O composition of Jabali smithsonite is generally lower than in other known supergene smithsonites, whereas the carbon isotope composition is in the same range of the negative δ13C values recorded in most supergene nonsulfide ores. Considering that the groundwaters and paleo-groundwaters in this area of Yemen have negative δ18O values, it can be assumed that the Jabali smithsonite precipitated in different stages from a combination of fluids, possibly consisting of local groundwaters variably mixed with low-temperature hydrothermal waters. The carbon isotope composition is interpreted as a result of mixing between carbon from host rock carbonates and soil/atmospheric CO2.
The most favorable setting for the development of the Jabali secondary deposit could be placed in the early Miocene (~17 Ma), when supergene weathering was favored by major uplift and exhumation resulting from the main phase of Red Sea extension. Low-temperature hydrothermal fluids may have also circulated at the same time, through the magmatically-induced geothermal activity in the area.
Key-words: Yemen, Nonsulfide deposit, Pb-Zn-Ag, Mineralogy, Stable isotopes.