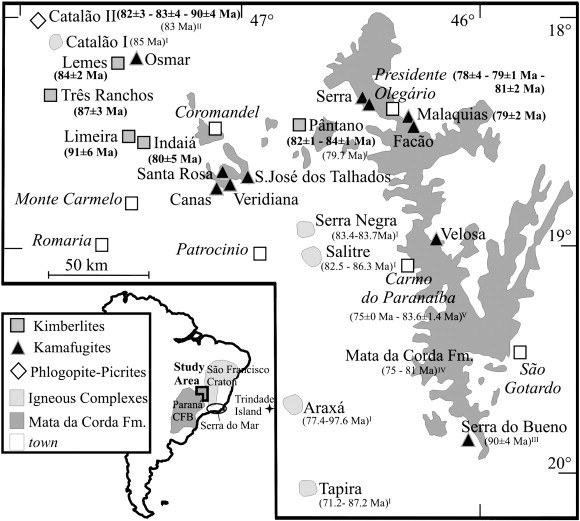 The kimberlites, kamafugites and phlogopite-picrites of Alto Paranaíba Igneous Province (APIP), southern Brazil, span a range between ~ 91 and 78 Ma with new in-situ, more tightly constrained U–Pb ages. The kimberlites show porphyritic texture with olivine xeno- and phenocrysts plus phlogopite, Fe-Ti-Cr oxides and perovskite microcrysts set in a carbonate-rich matrix. The kamafugites are feldspar-free rocks represented by ugandites and mafurites. Ugandites and mafurites are porphyritic and contain olivine and clinopyroxene phenocrysts in a fine-grained groundmass composed by clinopyroxene, perovskite, apatite, magnetite, phlogopite, leucite and/or analcime in ugandites, and by olivine, clinopyroxene, amphibole, phlogopite, perovskite, magnetite, kalsilite and Ba-zeolites in mafurites. Phlogopite-picrites have a pseudo-fluidal porphyritic texture with olivine phenocrysts and abundant phlogopite microcrysts in a groundmass composed by olivine, spinel, apatite, perovskite, calcite and rare garnet. New in‐situ Sr and Nd isotopic data on perovskites (87Sr/86Sri = 0.70467–0.70565 and 143Nd/144Ndi = 0.51222–0.51233) fall within the known ranges of APIP rocks (87Sr/86Sri = 0.70431–0.70686; 143Nd/144Ndi = 0.51205–0.51280).

The APIP magmas derived from a source assemblage made up of an old metasomatized mica-carbonate garnet lherzolite, that did not suffer interaction with convective mantle, nor with any hypothetical melts derived from a Trindade mantle plume. Geochemical modelling show that low degree melting (f = 0.5–2%) of such a source can produce compositions resembling the APIP rocks. The geochemical and isotopic composition of the magmas, the calculated degrees of partial melting, the composition of the calculated source and the absence of a hot spot track from Goias to Alto Paranaíba igneous provinces can be explained with the presence of chemically and mineralogically heterogeneous mantle sources that melted at different pressures.