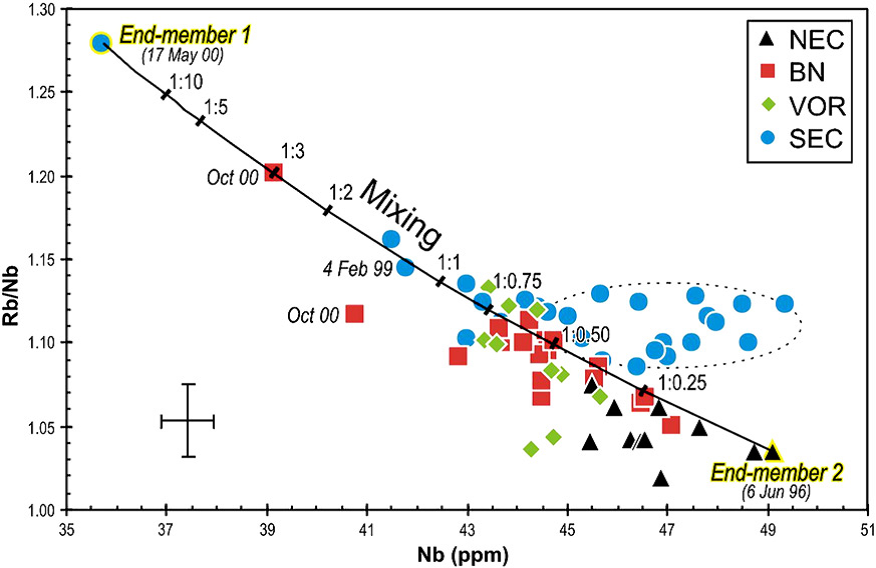 Mt.Etna volcano is located in a complex tectonic setting, with large sectors of its eastern flank sliding seaward at different rates. According to recent petrologic studies, the Etna's plumbing system has a multifaceted geometry, variable in space and time and consisting of storage zones at different depths, where magma ascending to the surface undergoes various processes, mainly fractional crystallization and mixing. In this framework we investigated a possible cause–effect relationship between the flank displacement and pre-eruptive magmatic processes in the shallow plumbing system (b5 km b.s.l.) during the decade 1995–2005. In particular, we analyzed petrography, mineral chemistry, geochemistry, Sr and Nd isotopes of the products emitted from 1995 to 2001 by the four summit craters of Etna (South-East, North-East, Bocca Nuova and Voragine). Results integrated with petrologic data already available in literature for the investigated decade, allowed us to better constrain the temporal evolution of the magmatic processes occurring in the Etna's shallow plumbing system (mainly mixing between compositionally and isotopically distinct magmas and fractional crystallization), and to make inferences on its geometry. Furthermore, a comparison between petrologic data and deformative patterns evidences that, from 1995 to July 2001, the aforementioned pre-eruptive magmatic processes did not significantly influence the volcano eastern flank dislocation, which stayed slow and fairly regular. By contrast, the onset of the 2001 flank eruption leads to an acceleration of the movement as a consequence of the ascent, of a primitive, volatile-rich, subaphyric basaltic magma from a deeper (about 10 km b.s.l.) reservoir, during the 2001 and 2002–03 activity. At least for the decade 1995–2005, pre-eruptive magmatic processes in the shallow portion (b5 km b.s.l.) of Etna's plumbing system, did not directly affect the movement of the volcano's eastern flank. Conversely, a magma intrusion which forcefully opens a new path from a deeper zone (about 10 km b.s.l.) of the plumbing system, causes a dramatic increase of deformative pattern, which strongly accelerates the slide of the eastern flank, as occurred during both 2001 and 2002–03 eruptions.