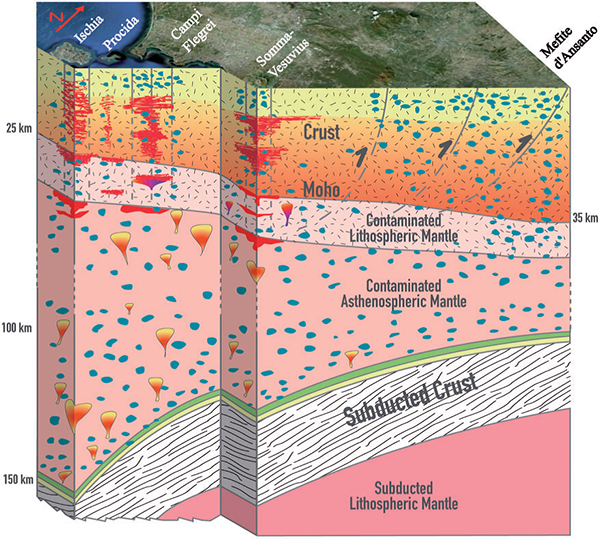 Ischia, a volcanic island located 18 miles SW of Naples (Southern Italy), is a densely populated active caldera that last erupted in AD 1302. Melt inclusions in phenocrysts of the Vateliero and Cava Nocelle shoshonite-latite eruptive products (6th to 4th centuries BC)  constrain the structure and nature of the Ischia deep magmatic feeding system. Their geochemical characteristics make Ischia a natural borehole for probing the physico-chemical conditions of magma generation in mantle contaminated by slab-derived fluids or melts, largely dominated by CO2.Volatile concentrations in olivine-hosted melt inclusions require gas-melt equilibrium at between 3 and 18 km depth.  In agreement with what has already been demonstrated at the other neighboring Neapolitan volcanoes (Procida, Campi Flegrei caldera and Somma-Vesuvius volcanic complex), a major crystallization depth at 8^10 km has been identified. The analyzed melt inclusions provide clear evidence for CO2-dominated gas fluxing and consequent dehydration of magma batches stagnating at crustal discontinuities.  Gas fluxing is further supported by selective enrichment in K owing to fluid-transfer during magma differentiation. This takes place under oxidized conditions (Fe3+/∑Fe≥0·3) that can be fixed by an equimolar proportion of divalent and trivalent iron in the melt if post-entrapment crystallization of the host olivine is discarded. The melt inclusion data, together with data from the literature for other Neapolitan volcanoes, show that magmatism and volcanism in the Neapolitan area, despite differences in composition and eruption dynamics, are closely linked to supercritical CO2-rich fluids. These fluids are produced by devolatilization of subducting terrigenous-pelagic metasediments and infiltrate the overlying mantle wedge, generate magmas and control their ascent up to eruption. Geochemical characteristics of Ischia and the other Neapolitan volcanoes reveal that the extent of fluid or melt contamination of the pre-subduction asthenospheric mantle wedge was similar among these volcanoes. However, differences in the isotopic compositions of the erupted magmas (more enriched in radiogenic Sr at Ischia, Campi Flegrei and Somma^Vesuvius with respect to Procida) and the amount of H2O in the plumbing system of these volcanoes (almost double at Ischia, Campi Flegrei and Somma-Vesuvius than at Procida) reflect the different flow-rates of deep slab-derived fluids or melts through the mantle wedge, which, in turn, control the amount of generated magma. The high bulk permeability of the lithosphere below Ischia, Campi Flegrei and Somma-Vesuvius, determined by the occurrence of intersecting NW-SE and NE-SW regional fault systems, favours fluid ascent and accumulation at crustal levels, with consequent larger magma production and storage than at Procida, located along the NE-SW system.
Fig. 11. Schematic cross-section of the asthenosphere and lithosphere below the Neapolitan volcanoes showing the relationships between the magmatic plumbing systems, the regional tectonic regime and the deep subduction system. A widely and uniformly degassing layer at the top of the subducting slab (down to ~ 150 km depth beneath the Neapolitan volcanoes; Chiarabba et al., 2008), related to the breakdown of CO2-H2O-bearing terrigenous and/or pelagic metasediments, supplies volatiles to the overlying asthenosphere and lithosphere, which are both contaminated by the ascent of supercritical fluids and melts. The asthenosphere is uniformly affected by exchange with the rising fluids. In contrast, the nearly 50 km thick lithosphere is contaminated by rising fluids along preferential paths coincident with the NE-SW transfer and NW-SE normal fault systems. In the Neapolitan region most of the magma transfer and accumulation occurs at the intersections between these two fault systems (Ischia, Phlegraean Fields and Somma-Vesuvius), whereas volcanic centres such as Procida that developed on top of the transfer fault system experience much less magma production. Traces of the NW-SE normal fault systems correspond to vertical shaded planes, whereas the NE-SW transfer fault systems are in the plane of the paper. Deep CO2-rich fluids (but not magmas) also rise to the surface in the compressional setting of the Apennine chain (Fig. 1) along one such plane.
KEY WORDS: CO2-fluxing; melt inclusions; redox state; trachybasalts; alkali enrichment