The modern seismographs amplify and record accurately soil's movement (typically with periods between 0.1 and 100 seconds) as a function of time, in the form of amplitudes and arrival times of seismic waves for earthquakes near and far. Although seismographs have existed since 1890, it was in 1930 only that Charles F. Richter, californian seismologist, has introduced the concept about earthquake's magnitude. His original definition was only for California earthquakes occurring within 600 km of a particular seismograph's type (the Woods-Anderson torsion instrument). His idea was simple: knowing the distance seismograph - hypocenter and observing the maximum amplitude of the signal recorded on the seismograph, it was possible to give a quantitative empirical ranking about inherent dimension in the earthquake, or rather, about its energy. Most California earthquakes occur within the first 16 kilometers of the crust, in a first approximation, so they were not necessary corrections for variations in the focus depth of earthquake. The original Richter's magnitude scale (ML) was then extended to the observations of earthquakes of any distance and focal depths between 0 and 700 kilometers. Since earthquakes produce two types of waves, body waves (P and S), traveling inside the Earth, and surface waves (L and R), who are forced to follow the natural waveguide of the Earth's uppermost layers, have evolved two new magnitude's scales: the mb (body waves) and MS (surface waves).
The "Magnitude" of an earthquake is a quantity that is related to the amount of energy carried by a seismic wave and is calculated on the basis of measurements made on the seismogram (maximum oscillation amplitude and estimate of the distance from the epicenter of the seismographic station). Richter defined magnitude M = 0 an earthquake that, at a distance of 100 kilometers from the epicenter of the reference station, generates a trace on the seismogram amplitude of 1 micron. Later, it was decided to give the magnitude of M=1, M=2 and so on, in that earthquake which, at the same distance, causes an amplitude of oscillation 10, 100 etc... times higher than that of earthquake of magnitude M = 0.

The formula of the Magnitude standard for volume waves is:

where A is amplitude of the movement of the soil (in microns), T is corresponding period (in seconds) and Q (D, h) is a correction factor which is a function of the distance D (degrees), between epicenter and station and focal depth, h (in kilometers) of the quake.
The standard formula for calculating the magnitude of surface waves is:

Typically, for the scale mb are used amplitudes of waves complressional P of 1 second. The scale MS uses Raileigh's surface waves in the range of period T=18-22 s. When initially developed, these magnitude scales were considered to be equivalent, in other words, earthquakes of all sizes, it was thought that radiate fixed proportions of energy to periods (T) different. But then it turned out that earthquakes larger, with larger rupture surfaces, systematically radiate more energy in the long run. Thus, for very large earthquakes, the magnitude of the volume waves (P and S) underestimated the long dimension of the earthquake; the maximum magnitude of the volume waves were in fact approximately 6.5-6.8. Although the magnitude of surface waves underestimated the size of very large earthquakes, the maximum values observed were approximately 8.3 to 8.7. . Some researchers have suggested that the Love waves of 100 s (another type of surface waves similar to Raleigh) should be used to estimate the magnitude of large earthquakes. However, even this approach does not take into account the fact that the damage to the structure is often caused by energy at shorter periods (high frequencies). Thus, the modern seismologists are increasingly turning to two separate parameters to describe the physical effects of an earthquake: seismic moment and radiated energy.

where μ is the shear strength of fractured rock, S is the area of the fault, and <d> is the size of the average displacement on the fault, that is what the parties have moved in contact with each other.
It was then defined a new scale of magnitude Mw, known as moment magnitude, which does not go into saturation

The amount of energy radiated by an earthquake is a measure of the potential for damage to man-made structures. Theoretically, its calculation requires to add energy's flow to a wide range of frequencies generated by an earthquake during the process of faulting. Due to instrumental limitations, historically most of the estimates of energy have always relied on the empirical relationship developed by Beno Gutenberg and Charles Richter:

where the energy, E, is expressed in ergs. The disadvantage of this method is that the MS is calculated by a bandwidth between about 18 to 22 s. It is now known that the energy radiated by an earthquake is focused on a different band and higher frequencies. With the worldwide spread of modern digital recording seismographs that have responses with large bandwidths, the calculation methods are now able to make accurate and explicit estimates of energy on the basis of the calculation routines for all large earthquakes. A magnitude based on energy radiated by an earthquake, Me, can now be defined:

For every increase of 1 unit of magnitude, the relative increase of seismic energy of about 32 times.
Although Mw and Me are both magnitudes, they describe different physical properties of the earthquake. Mw, calculated from seismic data at low frequency, is a measure of the fractured area of an earthquake; Me, calculated from seismic data at high frequency, is a measure of potential seismic damage. Consequently, Mw and Me often do not have the same numerical value. 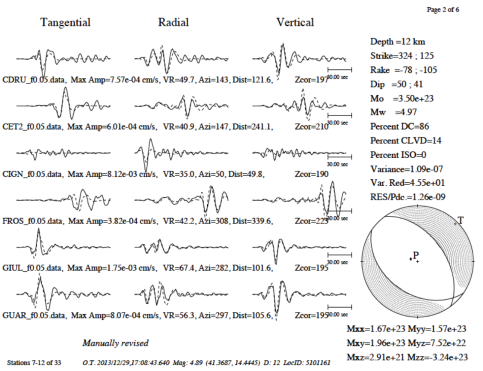 It may be interesting and instructive to analyze the relationship between two seismic events, 1 and 2, as well as between the corresponding energies involved, E1 and E2, related with their magnitude, M1 and M2. In fact:

that is to say that, for example:

At DiSTAR a research group coordinated by Prof. Tina Nunziata is currently involved in "Seismics and Seismology Applied to Vs definition", and "Seismic zonation and microzonation".