[1] Geological map of Procida Island (1:10000)
Stratigraphy of Procida island
The oldest rocks of Procida Island belong to three different volcanic centers [1]: Vivara (TVV), Pozzo Vecchio (PVH) [2], and Terra Murata (TMU). The stratigraphic relationships between these three volcanoes cannot be unequivocally reconstructed, possibly due to the limited distribution of their products [3]. The deposits of these monogenetic volcanoes are quite similar, showing stratified successions of massive or graded ash beds. Sand wave structures and impact sags are frequently observed, suggesting emplacement from pyroclastic currents and contemporaneous ballistic impacts. These three basal volcanoes are overlain by a tephra succession that consists of nine superimposed pumice-fall beds of decimetric to metric thickness separated by paleosols. It has been correlated with the Pignatiello Formation (55 < age < 74 ka, PPA1) of Ischia Island. The remnant of a fourth monogenetic volcano (Fiumicello, TFM) [4] is sandwiched between the uppermost two pumice-fall deposits. Locally, three exotic units separated by paleosols overlie the fall sequence (Pignatiello Formation). This succession is partially eroded, and the channel is filled by ashy material correlated to the 55 ka Epomeo Green Tuff (GA), which is the main caldera forming eruption of Ischia. Three ash deposits interlayered with a stratified ash- and pumice-fall deposit mantle the Epomeo Green Tuff. These are overlain by a widespread succession interpreted as the proximal facies (Breccia Museo) of the Campanian Ignimbrite (TGC) [5].
The Breccia Museo is subdivided into four units. The lower pumice flow unit is exposed is a poorly sorted, matrix-supported deposit with a coarse-ash matrix.  The breccia unit [6] is the most widespread of the Breccia Museo units, and it consists of a coarse lithic breccia that crudely mantles the topography. A dark-gray deposit mostly consisting of welded, coarse spatter clasts (spatter unit) is interlayered with the breccia unit. The upper pumice flow thickens in topographic depressions, is not lithified, is poorly sorted, and shows a slight normal grading of both pumice and lithic clasts. Degassing structures are abundant in this unit. Four ash deposits interlayered with paleosols separate the Breccia Museo from the deposits of the Solchiaro volcano (SHI). Solchiaro is covered by a few-meter-thick succession of ash deposits interlayered with an ash- and pumice-fall deposits, separated by paleosols (PD) [7]. This succession mantles the entire island and represents the youngest volcanic products accumulated on Procida [8]. At Vivara, above the Solchiaro products, there are three thicker ash deposits interlayered with a moderately sorted pumice layer. The upper two ash deposits contain earthenware and pottery fragments of the Bronze Age. 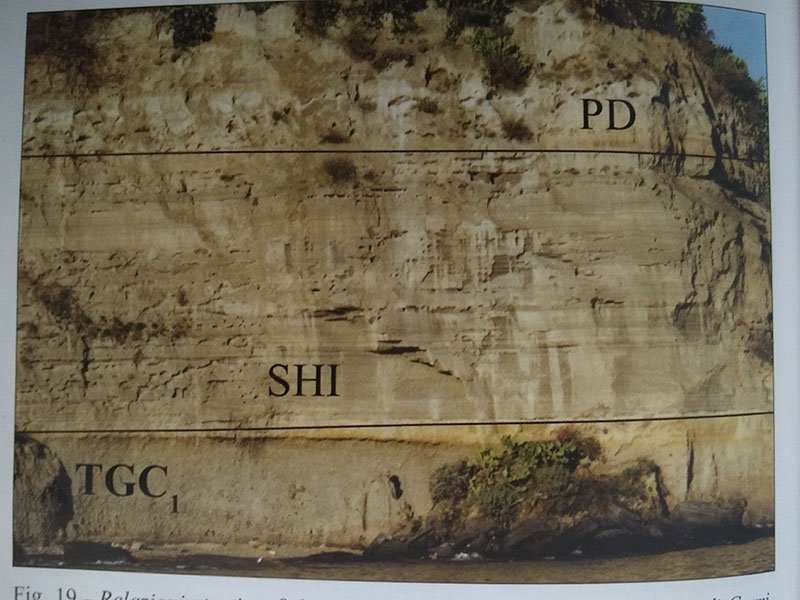 Paleogeographic Reconstruction of Procida Island
(9) Sketch of the temporal evolution of the Procida Island
The onset of volcanic activity in this area is still unconstrained, with an upper limit of ca. 70 ka. Three volcanic edifices
represent the oldest volcanic rocks of the area: the tuff rings of Vivara and Pozzo Vecchio, the latter of which also shows a final effusive phase and the tuff cone of Terramurata. These volcanoes are mantled by up to nine pumice-fall deposits with minor ash and breccia beds. All the fall deposits, which are separated by paleosols, represent the distal facies of products erupted at Ischia and emplaced east of their source.
Another tuff ring (Fiumicello) testifies to new explosive activity in the Procida area between 70 ka and 55 ka. The
subsequent activity is characterized by the emplacement of pyroclastic flows of both Ischia and Campi Flegrei provenance. In the following 16 k.y., only few thin ash and pumice fall settled in this area.
At 39 ka, the Campanian Ignimbrite eruption completely changed the (paleo)Flegrei volcanic field. This eruption started
with a sustained column from which pyroclastic material dispersed up to the Aegean Sea. Then, a huge pyroclastic current, possibly 1 km thick, buried a vast area under tens of meters of its sediment, and finally a large crostal sector collapsed, producing a caldera. In the proximal areas, including Procida, a thick succession of welded pyroclasts and lithic breccia associated with ash and pumice-flow deposits was emplaced. This valley ponding succession filled the topographic depressions between the older volcanic edifices. A 20-k.y.-long quiescent period followed the Campanian
Ignimbrite eruption, excluding the few distal ash deposits of undefined age. The next activity occurred ca. 19–17 ka with the formation of the Solchiaro tuff ring at Procida. This latter deposit represents the last volcanic activity on the
Island. After the deposition of some other distal ash and pumice falls at 15 ka, the Neapolitan Yellow Tuff, a new caldera-forming eruption, buried a wide area around Campi Flegrei. After this constructive phase, the prevalently loose pyroclastic deposits forming Procida experienced deep subaerial and marine erosion that remobilized a large quantity of material.
References
Carta Geologica Isola di Procida 1:10000
Perrotta Annamaria, Scarpati Claudio, LuongoGiuseppe, Morra Vincenzo 2010, Stratigraphy and volcanological evolution of the southwestern sector of Campi Flegrei and Procida Island, Italy, in Groppelli, G., and Viereck-Goette, L., eds., Stratigraphy and Geology of Volcanic Areas: Geological Society of America Special Paper 464, p. 171–191, doi: 10.1130/2010.2464(09).